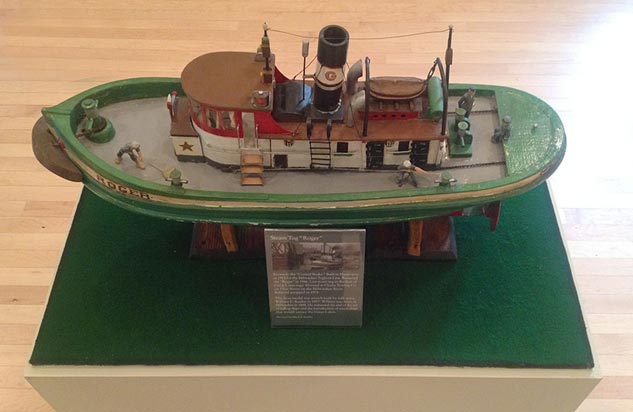 This classic tugboat was built in 1913 by the Manitowoc Shipbuilding Company as the Conrad Starke for the Milwaukee Tug Boat Line. In 1945 she was sold to Clark’s Super Gas Company, and the following year she was renamed, Roger. In 1947 she was sold to Petco Corp. The Great Lakes Towing Company of Cleveland, OH acquired the Roger in 1953. She was scrapped in 1973. My great uncle, William (Bill) Kuehn made this model in 1957 from a photograph.

The model is scratch built except for the figures of the deck hands, which were store bought. Kuehn was born in 1888 in Milwaukee and grew up across the river from the Wolf & Davidson shipyard. Wolf & Davidson was Milwaukee’s largest shipyard. It occupied eleven acres along the Kinnickinnic River at Washington Street. As a boy Bill watched them build the schooners and tugs. He built several boat models during his life. Three of them are on display at the North Point Lighthouse Museum.