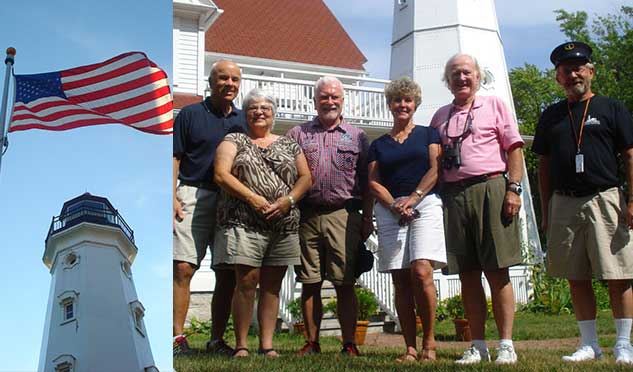 North Point Lighthouse Friends, Inc. is a 501[c][3] not-for-profit organization, incorporated in January 2002. The establishment of our organization is the result of the cooperative efforts of Lake Park Friends, the Water Tower Landmark Trust (now known as The Historic Water Tower Neighborhood) and concerned community volunteers.

THE MISSION of the North Point Lighthouse Friends, Inc is to preserve the North Point Light Station, to inspire appreciation of its importance in Wisconsin maritime history, and to promote its use consistent with the character of Lake Park and the surrounding neighborhood.

Children and adults have opportunities to tour the lighthouse and adjoining quarters, view interpretive exhibits, and attend (and host) special events. The first floor gallery in the Keepers’ Quarters is fully handicap-accessible.

North Point Lighthouse Friends, Inc. manages the property on an ongoing basis on behalf of Milwaukee County and the public. The friends have assumed responsibility for costs related to its maintenance and operation. In return, the North Point Lighthouse Friends have use of the structures and the 2-acre site. Milwaukee County provides lawn and landscape maintenance and snow removal.

Our special thanks go to all those individuals, businesses, community organizations and foundations that continue to support our mission from its inception.

Join the North Point Lighthouse Friends, Inc. and get involved now. You can be a donor, a sponsor, a volunteer, or a member, or even someone who will rent the facility. By becoming a “Friend” of the North Point Light Station, you can help us operate this historic site, develop exhibits and programs and maintain its beauty, so that together we can preserve history for future generations…

In the early 1990s, when North Point Light Station had been decommissioned, ideas were floated and sunk for what should happen to this decayed historic site. A joint committee of two local citizens groups:

All of this was to be accomplished without the expenditure of County Funds.

Looking ahead to federal, state and local milestones which lay ahead, the County granted the Friends’ placeholder an option, conditioned on raising the necessary funds, to restore the North Point Light Station and operate it as a North Point Lighthouse museum and meeting place (the “plan”).

The joint committee had created the plan of what should happen and its core was left with finding someone to do it.

Events had drawn the interest and participation of historic preservation and lighthouse enthusiasts (including some “lighthouse nuts”) from the greater community to fuel the interest of those committed to the plan and supply enough lighthouse “know how” to begin to be credible.

With the planning support of a local foundation and help of a skillful facilitator, a retreat to consider this was held at the (prophetically) Friends Center on the Milwaukee River. In January 2002 the North Point Lighthouse Friends, Inc. was incorporated to advance the plan. Fundraising and concept/budget planning began with the help of more friends and colleagues aiming to restore the 1888 home and the Lighthouse Tower.

Then the Friends partnered with Milwaukee County, as its public sponsor, and applied for, pursued and won, in a statewide competition, United States and Wisconsin Transportation Enhancement Funding of $945,000, 20% local match required, for the restoration of this historic transportation related facility into a public facility at the North Point Light Station, with the Friends committing to raise the match and any project costs in excess of the $1.2 million project costs.

On October 13, 2003, US Coast Guard and GSA representatives handed to Milwaukee County a deed to the North Point Station and, to the Friends, a ceremonial key to the Tower and Quarters.

Permitting, approvals, further fundraising, planning, designing, public meetings and public bidding would be required — along with further fundraising of significant amounts from many and blessedly substantial sums from a few — before the option could be exercised and construction could begin in 2007 and in November could be formally rededicated to the public according to the plan.

Past supporters included amazing public-spirited citizens, groups, agencies and the individuals who gave their time, money and talents to accomplish this restoration preserving a unique place and its heritage for the public and generations to follow. Somehow volunteers raised and contributed a total project cost of more than $1.6 million. For a list of our involved volunteers, visit the North Point Lighthouse museum.