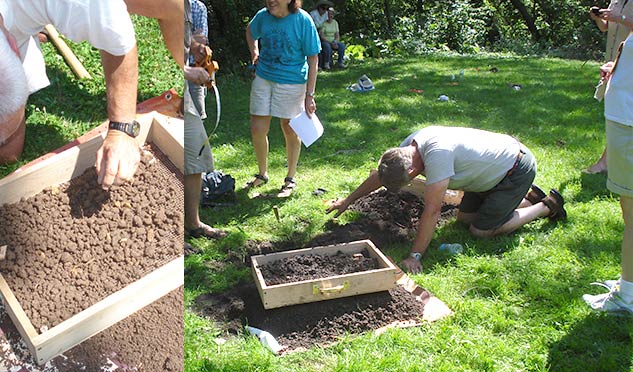 The presently visible North Point Lighthouse Tower and Keeper’s quarters date from construction in 1887, with operations commenced in 1888. From the beginning of restoration efforts and research, Friends knew from published history that an earlier Cream City brick lighthouse with built-in tower had been constructed and placed in service at North Point in 1855. They understood that Lake storms in the 1870’s had caused sections of the bluff to wash away and threatened that lighthouse and, as a result, the “new” lighthouse was constructed and “relocated” to its present location “about 100ft away from the bluff”.

Friends researched and “guesstimated” and tape measured from conceivable points to find where on the restored grounds the “old” lighthouse had been located.

Finally, through the concerted efforts of a “dig squad” of Friends, a land surveyor and an archaeologist from the Discovery World Museum, the metes and bounds legal description from the deed recorded in 1855 allowed the squad to “flag” the north and east corners of the that parcel on the present day Lighthouse and Lake Park. Using 19th century maps showing the bluff top location of the old lighthouse in relation to those boundaries, finally enabled the squad to approximate its location on a nearby point on the bluff not presently thought of as part of the North Point Light Station.

The squad’s initial passes with Discovery World’s ground penetrating radar confirmed the location of below-the-surface objects in that vicinity. More definitively, initial exploration of the bluff side from that location yielded Cream City brick demolition debris and artifacts. Subsequent phased archaeological surveys conducted by Friends and volunteers and Boy Scout Discovery World campers yielded more artifacts to further confirm the bluff top site of the old Light. Old photos and a display of the dig process are on display at the North Point Lighthouse Museum.

The squad’s goal–locating the footings and foundation of the old Lighthouse for present day Lighthouse and Lake Park visitors—remains to be met. New “diggers” can help monument the old site, to show that where what is now a peaceful park scene was once the site of a “lost lighthouse” very uncomfortably close to Lake Michigan’s fury. Click here to see the report.

Following years of examining old records, oral histories, photos, a new survey and ground penetrating radar sweeps, we believe that we have pinpointed the spot of the foundation near the bluff just north of the North Lion Bridge in Lake Park.

On June 11-12 from 9 AM to 3 PM, we hope our partner, UW-Milwaukee Archeological Research Laboratory Center, will confirm the 1855 site for our visitors and for posterity. They will conduct a limited excavation of two 1 x 1 meter units in the area.

A collaboration between the North Point Lighthouse Friends, Lake Park Friends and UW-Milwaukee Archeological Research Laboratory Center (ARLC) was developed over the past several years with the intent of finding the foundation of the original lighthouse.

The original lighthouse was built in 1855. We have a good idea of where it was located based upon old pictures and oral histories. In 2019, the area was examined using Ground Penetrating Radar (GPR) which provided further information. Click here to see the report.

Recently, on June 11 & 12, the dig was performed in an area at the bluff side of the North Lions Bridge. Approximately twenty archeologists led by Seth Schneider, PhD, students, and volunteers located the site using surveying equipment and data points obtained from the GPR. With appropriate approval from Milwaukee County Parks, two 1 x 1 meter pits were dug. The sites were staked out and the top layer of sod was carefully removed and set aside.

The pits were dug using hand tools, meticulously removing the dirt in 2–4-inch layers. The ground removed was then sifted through a metal screen. Any artifacts found were collected. The dirt fell onto a tarp to be reserved and placed back into the holes. Not only was finding artifacts important, but also the quality and characteristics of the dirt changed through the layers, giving the archeologists important information on the foundation location. By the end of the dig, all dirt and sod was replaced. The whole process was minimally invasive.

Over the next few weeks, the archeology team will process the materials obtained from the sites. It was felt that the findings are supportive of this being the original site and provide evidence for future excavations.

Stay tuned for future articles on the “Lost Lighthouse”.