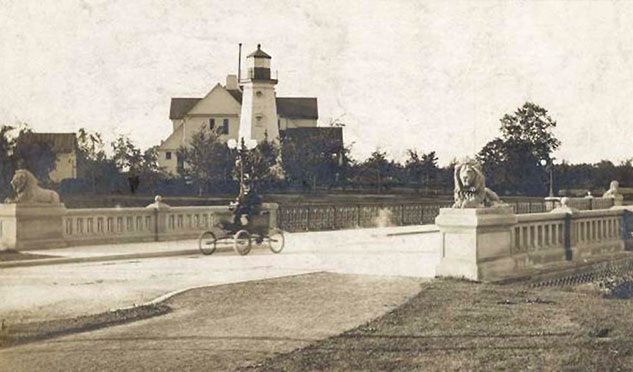 Celebrate the 130th Anniversary of North Point Lighthouse by visiting our museum this summer!

Interested in the North Point Lighthouse’s rich history? Click the tabs below to reveal information from a time era. Stop by the museum for a docent-led tour to learn even more about our lighthouse, view exhibits and climb the 74ft-tall tower.

1851 — Present two-acre site from Wahl Avenue to the lakeshore was acquired by the U.S. Lighthouse Service for a cost of $1000.

1855 — Original North Point Lighthouse is built with Cream City brick and officially begins operation on November 2, 1855. The 28-foot tower built on the bluff put the elevation of the beacon 107 feet above the water, the highest on the Great Lakes. A Milwaukee Sentinel article reports that the lens in the lighthouse was a Fourth Order Fresnel lens manufactured by Barbier, Benard & Turenne of Paris.

1868 — The original lens was replaced and the lantern room rebuilt. Most likely the new lens was also a Fourth Order Fresnel lens by the same manufacturer.

1870s — When shore erosion causes 16 feet of the Lighthouse’s front yard to break loose and drop to the beach, the government decides to build a new lighthouse 100 feet inland.

1886 — On August 4, Congress approves $15,000 to build the present Lighthouse and frame the Keeper’s Quarters.

1888 – Construction of the new cast iron tower is completed in December 1887 and the beacon is lit on the night of January 10, 1888. The new Lighthouse is built with a 39-foot high octagon-shaped structure constructed entirely of bolted cast iron sections. The 1868 lens is placed in the new Lighthouse. The present Keeper’s Quarters is built by 1888.

1893 – Lake Park was being designed by Frederick Law Olmsted, the premier 19th Century American landscape architect. North Point Lighthouse, surrounded by two acres of land, divided Lake Park into two sections. Before Lake Park could be freely traversed by carriage road, the park commissioners had to obtain permission from the federal government in Washington D.C. In 1893, efforts led by the commissioners and Wisconsin Senator John L. Mitchell resulted in permission to complete the Olmsted plan without disturbing the Lighthouse’s function. This allowed a carriage road and two bridges to be built east of the Lighthouse.

1900 – Trees growing in Lake Park along the shore begin to obscure the light from mariners on Lake Michigan.

1907 – Congress stops funding the lighthouse after city lights and growth of trees begin to obscure the signal. Merchants and mariners protest, and beacon begins to be operated locally.

1909 – U.S. Lighthouse Board reestablishes federal control of the light station and Congress authorizes $10,000 to double the tower’s height. A temporary wooden tower is constructed to keep the beacon operating while a new steel base is built.

1912 – The new steel structure with the old iron tower attached on top is put into service December 15th, placing the beacon at 74 feet from the ground and 154 feet above Lake Michigan.

1929 – The gas illuminate was changed from city gas to electricity.

1980 – North Point Lighthouse is placed on the National Register of Historic Lighthouses.

1984 – North Point Lighthouse is placed on the National Register of Historic Places.

1994 – With the advent of modern navigation equipment, lighthouses are no longer necessary, and North Point Lighthouse is taken out of service.

1996 – Community organizations in Milwaukee lay the groundwork for restorations and begin planning for appropriate use of the Lighthouse, Keeper’s Quarters and bluff-top site.

1999 – Milwaukee County approves the grant of an option to lease the Lighthouse, Keeper’s Quarters and bluff-top site to Water Tower Preservation Fund Inc.

2002 – On January 15, 2002, “North Point Lighthouse Friends” is incorporated as a non-profit organization to restore and operate the lighthouse as a historical Milwaukee museum.

2002 – North Point Lighthouse Friends, with Milwaukee County as a sponsor, applies for and obtained Transportation Enhancement Funding for restoration costs.

2003 – Wisconsin Department of Natural Resources accepts and grants closure for the lead in soil cleanup on Lighthouse grounds. United States Government transfers ownership of the Lighthouse to Milwaukee County.

2003 – On October 13, 2003, the U.S. Coast Guard officially transfers ownership of the 2-acre lighthouse property to Milwaukee County, making it formally and permanently part of Lake Park.

2004 – On March 10, 2004, North Point Lighthouse Friends exercises the option for a long-term lease of lighthouse and grounds from Milwaukee County.

2007 – In November, North Point Lighthouse opens to the public.

2009 – Fall: North Lion Bridge is rebuilt and reopens. Original Fourth Order Fresnel Lens from 1928 is placed on exhibit. The rain garden on the west lawn is installed to filter storm water.

2010 – Summer: “The Dig” search for the 1855 lighthouse foundation on the bluff north of the Cannonade begins

2011 – Fall: South Lion Bridge and Cannonade is rebuilt and reopens.