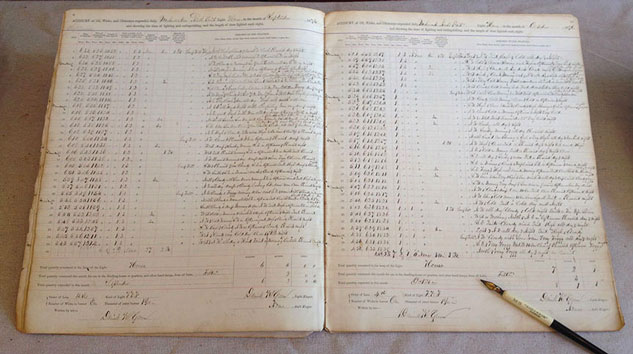 These lighthouse keeper’s ledgers dating from 1873 have returned to the North Point Lighthouse Museum after a 54-year absence. The daughters of the late Roger Erdmann, a Captain in the USCG, found them in the attic of his home in Durham, Maine last summer. Capt. Erdmann was transferred to Milwaukee in 1959 and served as the District Commander until 1961. He was my uncle. A native of Port Washington, WI, he joined the Coast Guard in 1939. He proudly served in WWII, The Korean War and the Vietnam War. He retired in the 1970’s.

A special thank you to my cousins, Carole, Greg, Barb and Paula for the safe return of these wonderful pieces of history and, had they not lived at NP, I would not be telling this story and would not have become the Curator. The ledgers are now on display at the NPLH Museum. Stop by and see them. We are taking donations to restore the bindings of the books so they last another 142 years.