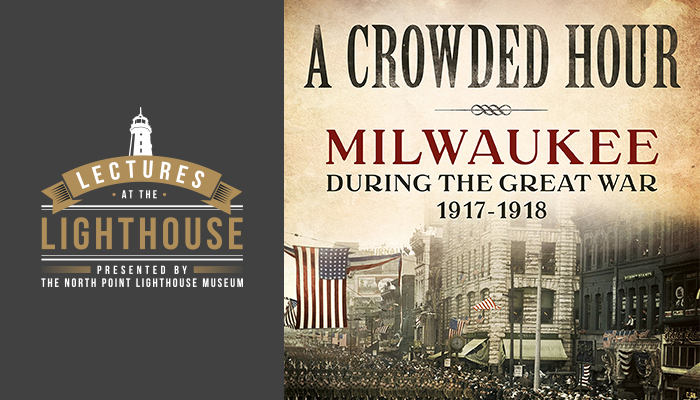 Simmering ethnic tensions, skyrocketing inflation, the meaning of American citizenship and the impact of a growing government bureaucracy affected every aspect of the lives of Milwaukeeans during the Great War.

In his talk based on his award-winning book, A Crowded Hour: Milwaukee During the Great War, 1917-1918, Kevin Abing examines the social, political and economic challenges that scarred and dramatically changed the city during and after World War I. Pro-war patriots considered Milwaukee’s loyalties suspect because of its large German-American population and strong Socialist Party presence. Consequently, Milwaukeeans endured intense efforts, some bordering on the paranoid or absurd, to enforce 100 percent Americanism and redeem the city’s reputation.

At the same time, the 1918 Spanish Flu pandemic was killing more than 1,100 Milwaukeeans and 50 million people worldwide. But the hand-wringing was unnecessary, as city residents exceeded every government wartime demand.

Abing was born and raised in southwest Wisconsin and earned his M.A. and Ph.D. in American History from Marquette University. He has worked more than 10 years with the Milwaukee County Historical Society, the last four and a half as the head archivist in the research library. His book, A Crowded Hour: Milwaukee During the Great War, 1917-1918, won the Gambrinus Prize in 2017 from the Historical Society for the best book on Milwaukee history.